« From Dan Demaree:
I took this footage using my dad’s Super 8 movie camera which I carried down the river in a waterproof ammo can. I would paddle down ahead and film Jimmy, Imre and Kim on the Upper. Jim did take some footage of me going over National Falls. And Kim took that footage of Jimmy and me in the little holes right above Lost and Found.
At that point in time, the only other movies I had seen of the Upper Yough were Ted Wadell’s Super 8 films, which were really great. And Greg Green took some Super 8 movies, but they were only average. So I took this movie and Lance Martin of Wilderness Voyaguers made 3 copies of it. They showed this movie frequently in the Wilderness Voyageurs Outfitters store. So even through this movie was taken at only 2 feet on the gauge, it still stoked people’s interest in running the Upper.
The people who would hear about the Upper from Wildwater West Virginia book, would often come to the lower Yough, to look up Dave or me. Whoever was working the store would show the movie, and people would get really psyched to run the upper the following day. The other 3 copies of the Super 8 movie were all destroyed in the fire that burned down the wilderness Voyaguers Outfitters store, which I believe was in the late 1970’s or maybe even 1980. » 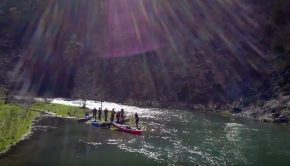