Remains of a River: Headwaters / Episode 1 from NRS Films on Vimeo.

Remains of a River: Headwaters / Episode 1

Every river begins somewhere, usually quite small. A trickle in the mountains of Wyoming’s Wind River Range becomes the mighty Green River, a major tributary of the Colorado River. In this first video of their Remains of a River series, Will Stauffer-Norris, Zak Podmore and some friends trek into the snow-covered heights to locate the river’s source. They’re on foot until enough water accumulates to float their pack rafts. The adventure begins – only 1,699 miles to go! 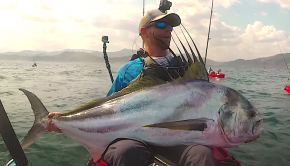