In this informative video created for SOT and kayak fishing enthusiasts, SKILS instructor JF Marleau breaks down the key components […

105 pound black marlin hooked and landed by Rob Wong Yuen on the Big Island of Hawaii.

A large hammerhead shark took I liking to my friends kayak while we were offshore fishing. The huge shark even […

Check out Jackson Kayak’s fishing and whitewater team all over the world. We are all of different disciplines and waters. […

This short video is my attempt at showing the world what kayak fishing is all about. This review of my […

Kayaker catches huge marlin and gets towed 11 miles out to sea over 5 hours.

Choosing your paddle is an important part of the kayak angling experience. This short video show how to choose the […

Get introduced to Werner Paddles new line of paddles specific to kayak fishermen, the Hooke Series! 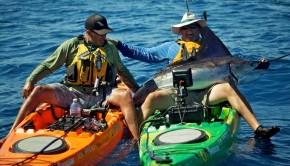 Photo of the Day – Jim Sammons (the kayak fishing show) lands a Striped Marlin from his Jackson Kayak!!

8 hours of solid paddling in the Baja sun. Jim Sammons (the kayak fishing show) lands a Striped Marlin from […