The sun is shining and the sea is beautiful. Our two heroes are on their way to Dalalivs Camping in the hope of pulling some swedish girls. But they are in for a surprise as they [&hellip... Read More →

Join the two Kayakers, Kay and Thor,  enjoying island life, and encounters with one of the larger inhabitants of the sea. This is the second wepisode in a series of 7. Read the Kayak-Log at: thordox.dk/kbh-bornholm/log-book/?lang=en... Read More →

Outrigger get smashed on big wave

Na Wahine was absolutely insane that day… especially getting out to the start!… check this great footage of an outrigger get smashed trying to get out... Read More →

Kayaked down the Red River on the Texas/Oklahoma border and camped out on an island in the middle of the river. This is my second attempt at video editing, and I must say I think it [&hellip... Read More →

Join the two Kayakers, Kay and Thor, on their 160Km paddle to Bornholm – a rocky island in the Baltic Sea. This is the first wepisode in a series of 7. Read the Kayak-Log at: thordox.dk/kbh-bornholm/log-book/?lang=en... Read More →

Downwind Surfski Paddle in Tarifa during Levante at 35 kn

Here is an awesome video of the Epic kayaks team in Tarifa, a few days ago when they set the new mark for downwind Levante Run at 1:12:30 h. Here you can experience the thrill with [&hellip... Read More →

Really cool video of some paddlers from Estonia, snow sea-kayaking in the street of their city&#... Read More →

The P&H Hammer is a radical new kayak that is primed to take ‘play the sea’ and river exploration to a whole new level. Influences from the P&H Delphin and the Pyranha Fusion and aspects of [&hellip... Read More →

South Evian Gulf is a Greek expedition team,  founded in 2010 by Aggelos Christophides, Aggelos Minoudis, Costas Manatakis and Chris Flevotomos. Foreseeing their deep love for the sea and for maritime voyages, the team΄s orientation is [&hellip... Read More → 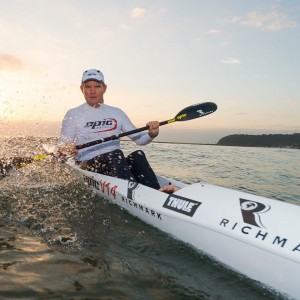 Do not miss the 2013 issue of paddle world mag with an ocean racing special folder... Read More →