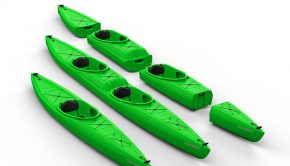 This serie of articles, called “NEW @ The Paddle Sports Show 2021” showcases the products that are competing for the […