Follow BC sea kayaker Mike McHolm on a session in Howe Sound. Going from Porteau Cove to Zorro Bay. Some [… 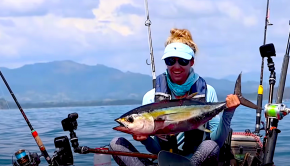 We are all connected

This video “We are all connected” is based upon relationships I have built on and off the water. Sea kayak […

Testing out the Predator PDL kayak on the ocean and trying out how mobile and stable the kayak really is. […

Turns out that Flipper likes fish dip too! Here’s a video of my quick offshore kayak fishing trip before work. […

Had a great morning out on the ocean. Unfortunately the tuna did not play along. We saw some dolphin and […

River, Wilder and Archer head to British Columbia to learn how to Kayak – will they see Orca’s and Humpback […

First trip with my new Sterling Reflection II Kayak. This was a weekend course to learn safe launching and landing […